The Dangers of Mixing Ambien with Alcohol What happens when you mix Ambien with Alcohol?

If you have been prescribed the drug Ambien, it is very important to understand the effects of mixing it with Alcohol. You have to be aware of the dangers and risks that this combination can have, particularly in terms of what will happen to your body. Some people become addicted to Ambien and Alcohol, which can make it particularly difficult for them not to mix these two. However, help is out there for those who have addiction problems.

Attention: This mix can kill you!

A Person with a history of heavy drinking is never prescribed Ambien as it can be fatal. The increased likelihood of sleep-driving and other dangerous behaviors, even normal doses of Ambien are too dangerous to take with alcohol.

⇢   Both drugs are depressants

Ambien’s Effect When Taken With Alcohol

The drug Ambien is a sedative prescribed to those who struggle to fall asleep. Zolpidem is the active ingredient within Ambien that acts as a depressant to the central nervous system by slowing down brain activity. Ambien comes in two forms, one being extended-release, and the other immediate-release. Since its development, doctors have seen a notable decline in the abuse of the prescribed pharmaceuticals traditionally used to treat insomnia.

According to the National Institute on Drug Abuse, Zolpidem acts similar to Benzodiazepines, such as Xanax. Zolpidem is made with a different molecular structure aimed to decrease the chances for anyone to develop a physical addiction to it. The DEA states that Zolpidem has a low dependency potential so long as it is used according to the prescribed methods. This is also where the problem lies, though.

People who take Ambien according to prescribed methods are well aware not to mix it with Alcohol. However, many people who already have a problem with their drinking refuse to inform their prescribing doctor.  Mixing Ambien with Alcohol is cause for significant concern. Each drug is designed to slow down the activity of the body’s central nervous system. Taken together will have a profound impact on a range of different bodily systems and major organs.

Ambien is essentially a sedative that helps with sleeping issues available by prescription only; overdosing on it alone can lead to deadly consequences. Adding Alcohol to Ambien will amplify its effects and vice versa. Sedatives are addictive on their own and regular use of Alcohol and Ambien together will lead to psychological and physical dependency.

Research has shown that around 30 percent of women in this country use at least one sleeping pill per week. However, very little data exists on the effects of combinations with sleeping pills. From a clinical perspective, it is likely that women will take combine it with other drugs as well. Unfortunately, researchers continue to study the effects at just one drug at a time, which means there are not many studies available yet on how different drugs and substances affect Ambien. It is a known fact that consuming Alcohol and taking prescription sleeping pills can have deadly consequences; in 1967, Beatles manager Brian Epstein died as a direct result of this. He wasn’t the first and certainly not the last, with many celebrities and non-celebrities alike having met a similar fate since then. When combining sleeping pills with Alcohol, people are more likely to experience very bad falls and accidents, sometimes leading to paralysis or even death, with an increase in the feeling of depression and anxiety and find it much more difficult to function normally the following day. How Long After Drinking Can I Take Ambien?

One of the problems with Ambien is that it can lead to residual effects the day after taking it. The National Institutes of Health has reported that having as little as two drinks on an evening after having had Ambien can result in people becoming unproductive and sluggish the next day. Those who regularly drink in addition to taking Ambien are not only likely to start developing a dependence to Zolpidem, but also a tolerance to it.

There is a real risk of having an overdose when combining these two substances. It is very important to become aware of the signs of an overdose of Ambien mixed with Alcohol and what to do if and when an overdose becomes a reality.

The symptoms of an Ambien overdose made worse by alcohol include:

If left untreated, an overdose can lead to a coma or worse, respiratory failure and death. If you believe you or someone you care about is experiencing an Ambien and Alcohol overdose, immediately call 911 and seek help.

It is known that Ambien has some delayed effects and so it is recommended to leave at least 24 hours between taking Ambien and drinking Alcohol, or between drinking Alcohol and taking Ambien. No real studies have been completed to date on what a safe time period actually is. What is known is that Ambien remains present in the system from 12 to up to 60 hours. Waiting as long as 60 hours between using Ambien and Alcohol ensures optimal safety. If you are abusing Alcohol with Ambien, get help before it is too late.

Physical Risks and Side Effects of Mixing Alcohol and Ambien

The additive effect experienced when you mix Ambien and Alcohol together goes both ways. Ambien will amplify the effects of Alcohol, just as Alcohol will amplify the effects of Ambien. Alcohol is a sedative type of drug, leaving one to feel lightheaded, drowsy, and sleepy. When you add Ambien to the mix, it is likely that you will find it increasingly difficult to concentrate and your coordination will be impaired leading to being accident-prone. With the effects of Alcohol being enhanced, you may find yourself more prone to taking part in dangerous and risky behaviors, often without realizing what is actually happening around you. It is important to note that the day after combining Alcohol and Ambien, people often have no memory of what they did at all, virtually a blackout.

Another danger when taking Ambien is the tendency to enter the state of somnambulism (sleepwalking). People have reported doing normal activities like preparing food or even driving while under Ambien. Sleepwalking always has the potential to be dangerous, but when the effects of Ambien are compounded with Alcohol, these dangers are made much worse.

The chance of overdosing on Ambien also increases when the drug is taken with Alcohol. This is because the two drugs enhance each other’s effects, making them much stronger than when the substances are taken alone. It is unlikely that an Ambien overdose will kill you, but if combined with Alcohol, an overdose involving the combination does have the potential to be deadly. 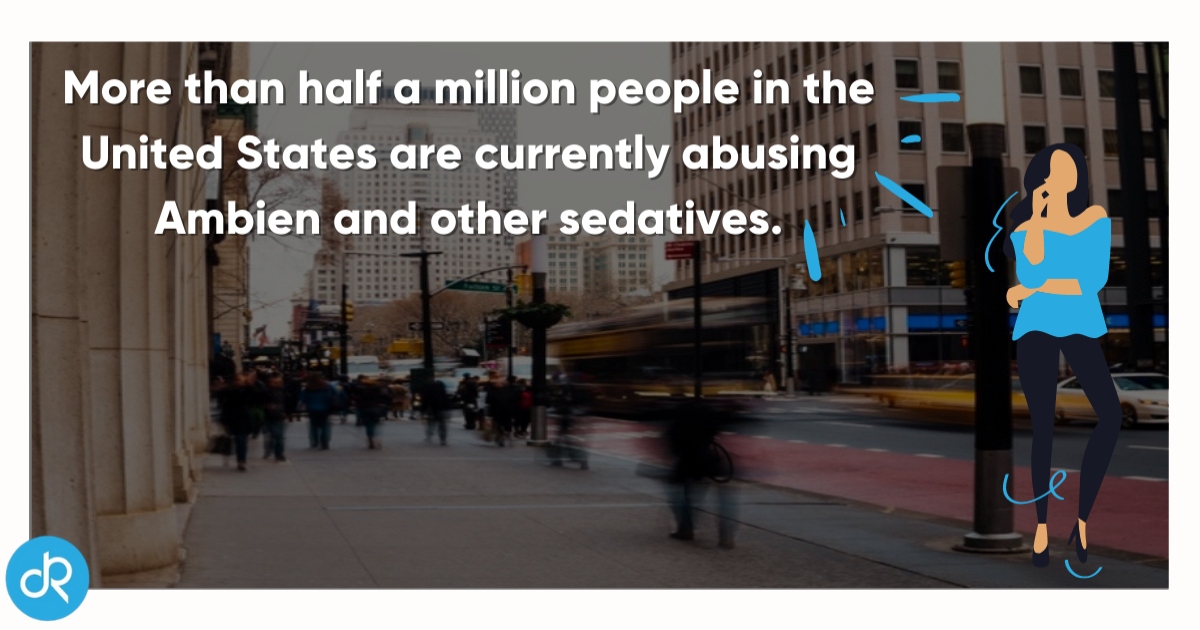 Quick Facts: More than half a million people in the United States are currently abusing Ambien and other sedatives.

When drugs mix inside the body, the potential side effects become very dangerous. Sleepwalking is the most dangerous and common side effect people experience when they mix Ambien with Alcohol. One study looked specifically at how z-drugs like Zolpidem affected someone’s ability to drive, and they found that when people take Ambien (the specific brand name) and alcohol, there was a marked increase in the number of people experiencing parasomnia, which means they perform the task of driving while sleeping.

Ambien taken on its own has the potential to have dangerous effects and when taken together with Alcohol these are significantly enhanced. As a result of this, the International Council on Alcohol, Drugs and Traffic Safety has classified Ambien and all other Zolpidem drugs, as Schedule II substances. This means that it is classed as impairing someone’s driving ability in the same way as a 0.05 to 0.08 blood Alcohol content.

The combination of Ambien and Alcohol presents a number of very strange somnambulism effects. These include not just sleepwalking and sleep driving, but also sleep shopping, sleep eating, and sleep sex. The chance of these occurring becomes larger the heavier the dose of Ambien is taken, or the bigger the consumption of Alcohol.

Both drugs cause mental impairment, and this is significantly enhanced when the drugs are taken together. This is why at least 50 percent of admissions to the emergency room involving Ambien or Zolpidem also involves the consumption of other substances, and particularly Alcohol. The Drug Abuse Warning Network has released a report in 2010 that stated some 57 percent of all emergency room visit and full admissions to hospital that involved Ambien did also involve other substances. 14 percent of those, or 2,851 individuals, combined Ambien with Alcohol. What this truly demonstrates is the fact that taking Ambien and Alcohol at the same time is a dangerous combination and one that also makes it more likely that you will be admitted to the ICU. Stop right now and save your life.

What Are the Effects of Mixing Ambien and Alcohol?

Zolpidem is the active ingredient of Ambien, and this is a reasonably strong sedative. Zolpidem, when taken in large amounts can cause people to feel a euphoric high, and it can even cause hallucinations. This can also happen if people do not go to bed straight after taking Ambien, particularly if they use the immediate release type.

Unfortunately, because of the potential for euphoria and hallucinations, some people have started to abuse Ambien, particularly by mixing it with Alcohol. While no scientific studies have been conducted on this, there have been a number of self-reported examples where people have combined the two substances. In these, they have noted: Ambien abuse has both long and short-term negative effects. The long-term problems are significant, particularly when the drug is mixed with Alcohol. These include organ damage to the pancreas, heart, brain, kidney, and liver. There is some suggestion that it can lead to changes in behavior and cognition, including irritability and increased aggression.

Numerous problems are associated with using Ambien and Alcohol at the same time, some of which are really serious. They include:

Clearly, the potential effects of mixing Ambien and Alcohol are very serious and dangerous because of the behaviors that can happen while someone is actually sleeping. Additionally, there is the chemical reaction that occurs when Alcohol and Ambien are mixed, which affects both the body and the brain, in a magnified way compared to taking only one of the two substances; the two drugs intensify each other’s effects. It is certainly true that it is pleasant to feel very relaxed or even euphoric, but it is important to understand that those are not natural states of the body. Continued and extended feelings of euphoria can be dangerous to your own health.

Alcohol is a socially acceptable drug, but a drug nonetheless and it is readily available almost anywhere. When combined with Ambien, the effects can be deadly. The greatest concern for medical professionals is that it increases the risk of someone sleep-driving. This is why even a low prescription dose of Ambien should not be taken with Alcohol. Only through full abstinence of Alcohol can you take Ambien safely.

When you mix Alcohol and Ambien, you enhance the dangerous effects of both drugs. Both drugs also have effects that are already dangerous on their own. This is why the official recommendation is to never mix the two substances. People who live with others who take Ambien should take some responsibility in making sure that the other person does not take any Ambien if they have taken any Alcohol and that they go to sleep straight after taking Ambien, rather than having a drink.