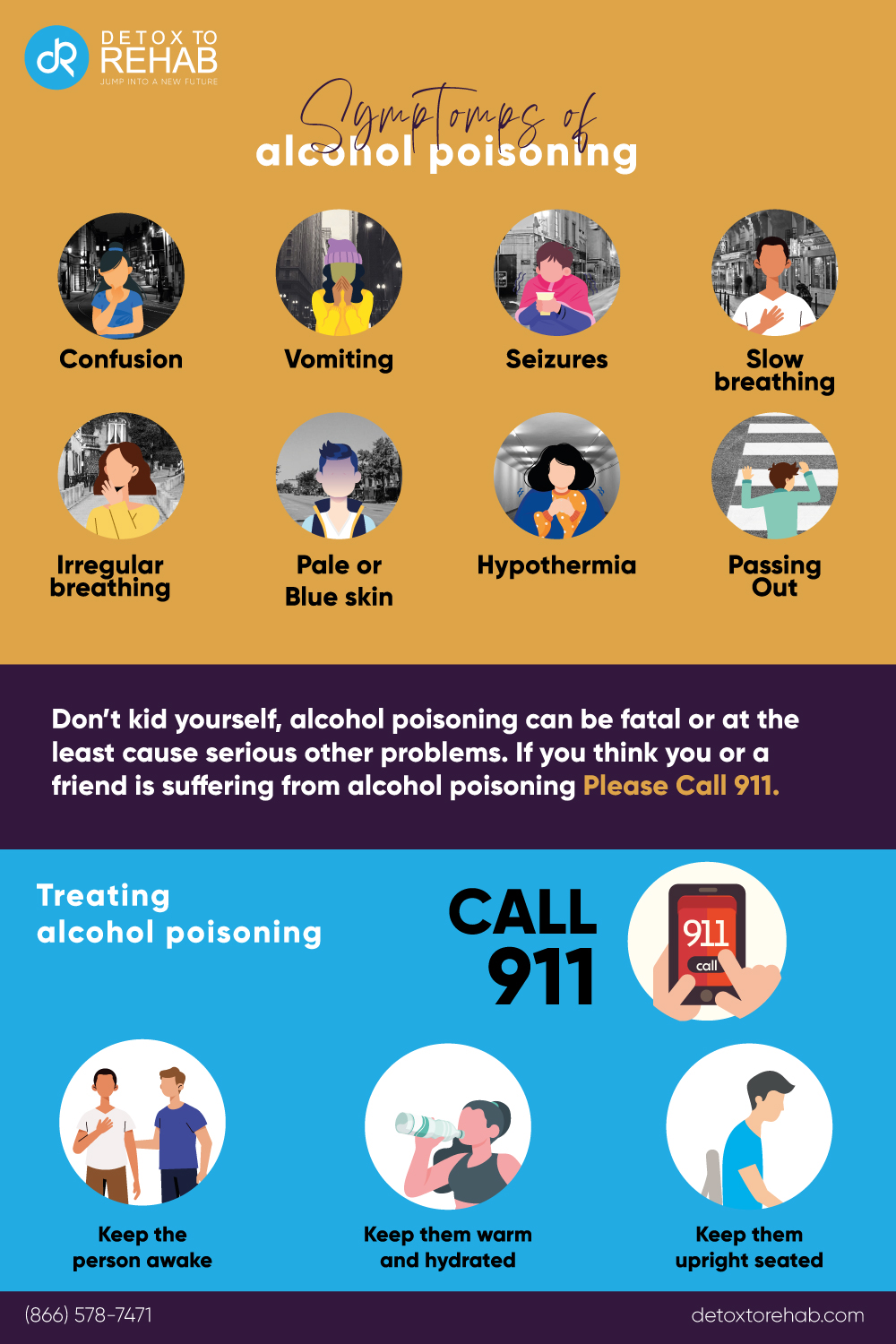 Alcohol is a very popular drug; the majority of adults in this country drink Alcohol and it is perfectly legal to do so as long as you are over the age of 21. The problem with Alcohol is that a large number of citizens in this country end up drinking far too much leading to issues with Alcoholism and Alcohol Poisoning. The CDC has stated that about 2,200 people die of Alcohol poisoning every year in this country, which equates to six individuals each day.

Since it is legal to drink alcohol, people don’t really think much about what it does to their body. Initially, over time Alcoholism will induce skin damage and attack major internal systems. Because of this, it is possible for people to experience sudden symptoms of Alcohol poisoning without even being aware of it entirely.

What Happens When You Get Alcohol Poisoning?

If an individual was to drink too much Alcohol, they will begin to experience Alcohol poisoning. Alcohol poising is when the bloodstream is flooded by Alcohol that then travels to the brain. The brain is no longer able to control important things like heart rate, breathing, and body temperature. Breathing becomes uneven and depressed, the body cools down and people may begin to experience seizures as a result.

Alcohol poisoning doesn’t always happen out of choice, as it can occur accidentally. The active ingredient in Alcohol is ethanol, which can also be found in various household products. While the vast majority of cases happen because someone chooses to drink too much in one sitting, there have been cases of Alcohol poisoning happening through accidental ingestion. The liver is responsible for processing Alcohol, and it is only capable of processing a single serving of Alcohol per hour. Single servings for various kinds of Alcoholic drinks are as follows:

Of particular concern is the culture of binge drinking in this country, which has already caused so many avoidable deaths. What is binge drinking? Binge drinking means that women have more than four drinks in a two hour period, or that men have more than five drinks in that same time period. What is strange is that binge drinking is very much a part of college culture, but the majority of cases of Alcohol poisoning happen in those whose ages range between 35 and 64. This may be because body chemistry changes with age. Also, older people are more likely to be prescribed medication that could possibly interact with Alcohol, or because there have been changes in preferences for certain drugs. The demographic most at risk of Alcohol poisoning death are white, middle-aged men.

90 percent of binge drinkers did not have an Alcohol Use Disorder, meaning they were neither dependent nor addicted to it. AUD was found to be present in 30% of all deaths related to Alcohol. This means that having an AUD is a risk factor in Alcohol poisoning.

Quick Facts:
In 2014, there were over 5 million people aged between 12 and 20 who had reported instances of binge drinking.

The Effects of Alcohol Poisoning on the Body

As the liver can process no more than one serving per hour, if someone drinks a second serving, there will be one serving that remains in the system of the individual. This will take another hour to process. Most people consume Alcohol as a drink, which means it is much easier for it to enter the bloodstream and get to the brain through the digestive system. Compared to other drugs, this is one of the slowest ways of becoming intoxicated, and in this lies the danger. When people start to feel intoxicated, they are already well over their limit, but there is certain amounts Alcohol that hasn’t been processed yet. Even if they were to stop drinking once they start to notice intoxication symptoms, they may still develop Alcohol poisoning. In the worst cases, people don’t stop drinking even when they start to show symptoms of intoxication, meaning that they already have enough Alcohol in their body but by consuming more, they put themselves at greater risk for alcohol poisoning. The effects of Alcohol poisoning on the body are severe and include:

If you drink to excess or know people who do, it is important to be aware of the symptoms of Alcohol poisoning. Recognizing them means that you could potentially save a life. Most common symptoms include:

Most common symptoms of Alcohol Poisoning include:

How Do I Help Someone With Alcohol Poisoning?

When you encounter people who appear to be suffering from alcohol poisoning, it is vital to take the right action immediately and call 911. You must then stay with them to ensure that they cannot come to self-harm. If they are unconscious they could choke on their own vomit. Make sure emergency help is on its way, even if they have not lost consciousness and are still speaking. Alcohol in the stomach may not have been processed yet and the symptoms of alcohol poisoning could still get worse.

Once you have phoned emergency services, there are a few other things that you should do.

What NOT To Do

There is also a lot of things you should NOT do.

Once the emergency medical services arrive, they will provide them with emergency medical care and take them to the hospital. The patients will be monitored until it can be ascertained that all the alcohol has been processed and no further damage will require treatment.

When someone undergoes severe alcohol withdrawal symptoms, it should be considered a medical emergency. Call 911 and remain with the person until they arrive.

Quick Facts:
In 2012, over 3 million deaths worldwide were attributable to alcohol abuse and addiction.

If you have had too much to drink the night before, you will probably wake up still tasting some of the alcohol in your mouth, and smelling of it on your body. You will notice a terrible headache, and you may also struggle to remember everything that happened and whether or not you threw up. It’s not always clear whether those feelings are caused by a hangover, or whether they actually have alcohol poisoning.

Hangovers are unpleasant but rarely dangerous. They are characterized by:

Different people experience hangover’s in different ways, and it depends on how much alcohol was consumed. Essentially, the more you had to drink, the worse your hangover will be. Alcohol poisoning is like a hangover, only worse. It is more dangerous and more intense, as well as happening much more quickly. A hangover appears after a night sleep, whereas alcohol poisoning is more likely to occur while the drink is being consumed.

A key difference is that most people will be able to tell that they have a hangover, but they will need someone else to spot alcohol poisoning and phone for medical assistance. The most important thing is that you are aware of how to prevent alcohol poisoning – and even a hangover – from happening in the first place. To do that: