Damon House, Inc was founded in 1969 as a nonprofit social service organization and was incorporated in 1971, in Paterson, New Jersey. Originally, it was licensed under the New Jersey Department of Health, however as the Division of Addiction Services was transferred to the Department of Human Services, so was the agency. In 1974, prompted by a concern from the mayor, Damon House relocated its primary location to New Brunswick, New Jersey. For several years both locations provided both inpatient and outpatient services for clients. However, by the 1980s the New Brunswick facility served exclusively inpatients while the Paterson residential facility was phased out. Although Paterson no longer served inpatients, the Outpatient Program continued to operate in Paterson and was expanded to include an Intensive Outpatient Program that currently accepts clients referred from Drug Court. 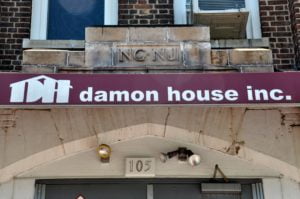