I am one in five million.

According to the National Institute of Mental Health, 5.7 million American adults have bipolar disorder. That’s about 2.6 percent of the population. Odds are, two out of every 100 people you meet will have this disorder. Bipolar disorder is a mental condition characterized by alternating cycles of mania and depression.

When I first found out that I had bipolar disorder, I didn’t want to believe it. I was 21 years old, living on my own for the first time as a college student at Arizona State University. It was my first time away from home and I thought this was just so 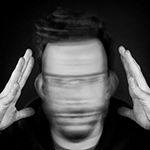 mething that every kid goes through. So what if I was staying up all night, wearing weird clothes, not doing homework. Wasn’t I just having the college experience?

People began to worry. I started getting messages and calls from people I cared about asking if I was okay. Due to their concern, I decided to seek out a psychiatrist to address my issues and take medication. The first medication cocktail my psychiatrist suggested was Depakote and Abilify.

My New Friends: Abilify and Depakote

I remember going home to my uncle’s house, where I was staying for the summer, and listening to him read me the various side effects of the pills. Depakote’s side effects were: nausea, vomiting, extreme drowsiness, dizziness, weakness, rash, tremor, headache, 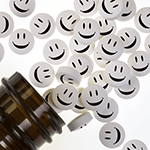 fever, and hair loss among other things. Abilify’s side effects were pretty much the same.

Naturally I was a bit paranoid about taking these medications. However, spurred by the love and support of my family who was worried about me, I obliged. An hour after taking them, I woke up on my uncle’s bathroom floor. I had passed out while attempting to use the restroom. This was marked the beginning of a long and painful journey with bipolar medication.

During the summer, I was a zombie. The pills made me drowsy and seemingly slowed my brain. I went from thinking a mile a minute, to feeling like my thoughts were coming out like molasses. I felt dumb. I felt boring. I felt like I wasn’t myself.

After taking my medication for three months straight, I quit near the beginning of the next school year. The original plan was to have me take a year off, but I shamed myself into going back in the fall.

It was a mistake.

Resisting Medication and Embracing the Mania

I stopped taking my meds and spent $4,000 dollars of my $5,000 loan for school in less than a month. I was manic. And I was having fun. I was feeling the full spectrum of my emotions. My thoughts were faster than a bullet train. And I was what I considered myself again. However, that didn’t last l 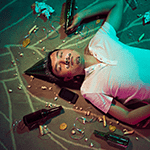 I was running out of money, burning bridges and flunking my classes again. I was back where I
started. I want to say that it was during that semester that I decided to get back on medication for good, but that’s not my story. It took me four additional years to finish college. I took a couple semesters off, failed some and barely passed others. Throughout my college experience, until the very end at least, I was on and off my medications. There were periods where I was stable and I didn’t feel like a zombie, but I craved the manic highs, so I would get off the medication.

There wasn’t a real big epiphany that led me to get back on my medications for good. I simply realized that I wanted to graduate and decided to get my act together as best I could. I was sick of the monotony of impulse. Living in the moment was becoming boring for me. So I took my meds more regularly. I wasn’t experiencing the soaring highs, but I was being productive. And that felt good.

It’s been a real challenge to come around to the idea that I need my medication. There were times where I fought it and it only led to disaster. One thing that has helped me is changing how I view my disorder. I began viewing it as a gift. 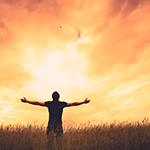 Bipolar disorder is a unique disposition that allows people to feel on multiple levels and layers. Under the right medication regiment, which I have found, you can still experience the textures of emotions and thoughts without falling into the depths of depression or the self-aggrandizing highs of mania.

In my experience, I’ve seen people suffer through bipolar disorder and try to self-medicate with drugs and alcohol. According to the American Journal of Managed Care, approximately 56 percent of people with bipolar disorder went through drug or alcohol addiction in their lifetime. Mental health issues and drug abuse go hand-in-hand. In my experience, I’ve attempted to use alcohol to self-medicate. During the semester where I spent almost $4,000 in a month, I probably spent a quarter of that on alcohol.

That being said, alcohol only amplifies the pre-existing problems, offering a sheen of tranquility for the moment, while sending you down a road of pain. Everybody has their own process of healing. For me, I realized that I needed medication and to realize that bipolar disorder wasn’t something to run away from, but to embrace. It is a gift and I’m learning to receive it.

I am one in five million. And now, I am proud.