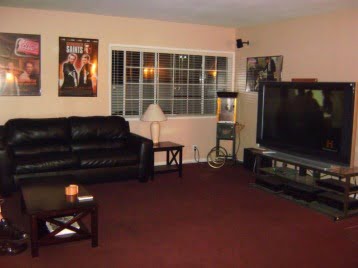 We are a men’s sober living in the city of Fullerton, California, in North Orange County. Our mission is to provide a safe harbor for those in recovery by providing quality housing in an alcohol and drug free environment. This is a clean, peaceful house where we support each other and help each other stay clean and sober. Our Residents demonstrate commitment to sobriety by going to meetings and working a 12-step program.Our home is a beautiful, large, remodeled home with new beds and bedding, new furniture, a huge large screen TV, free cable, wi-fi internet, computer, free phone, gourmet popcorn machine, nice kitchen, laundry facilities, central air/heat, all utilities included. Two men in a room -- no bunk beds. We are very close to the bus, shopping, freeway and meetings.

Anonymous
2017-12-22 05:42:17
I've been living at Transitions Sober Living for eight months, and would like to share a few things about my quest for sober living and the place I call home.Before meeting with the manager at Transitions, I looked at a hand full of other sober living homes. All my hopes and energy to find a safe sober environment were squashed by what I had seen. I wanted a safe/clean place to live, and to get my problems under control to someday leave with sobriety and a strong mind in staying that way. Maybe I had the worst luck ever, but every place I visited was unbelievably disordered and vile. I'm not exaggerating at all. The advertised sober living homes I checked out, looked like Freddy kruegers version of a flop house. I expected to open any given door to see the Crypt Keeper cackling in my face, and in a couple of instances where I walked into the so called living room, a few of them had to have been a close relative. Filthy, hazardous, non conducive to any kind of sobriety to say the least. I saw mumbling weirdos walking laps around an advertised pool table that was in shambles, sleeping rooms that were stacked with bunk beds full of lost souls. Don?t get me started on the bathrooms. An utter nightmare. I deeply feel for the people I saw, especially for the younger people that had an ultimatum by their parents or the state to live there. After seeing a hand full of these types of places, I thought sober living was a desperate place for escaped mental patients. It was bad. I was completely over the idea of a sober living house, but decided to call one more number advertised on the internet ?Transitions Sober Living?. The owner of the house answered, and arranged for me to meet with the house manager the same afternoon. I pulled up to the driveway and immediately noticed how different the place was compared to the others. I thought I must have had the wrong address. The manager opens the door and shows me 1/4 of the house, and I'm already reaching in my pocket for first rent. The bed rooms were CLEAN, kitchen was kept, house computer room with use of internet/printer, leather living room couches with a flat screen tv that took up half the wall, and bathrooms that did not look like Swamp things outhouse. I had the feeling that ?normal? people lived here. After speaking at length with the manager, and chatting a bit with the current tenants, I was sent on my way with the promise that the owner would get back to me. Later that day he called and accepted me into his home. I can say for certain that the quality of Transitions Sober Living isn?t so much about the building itself, but the people who operate it, and the people who are allowed to live here. For this, I give it five stars.

Anonymous
2015-10-11 04:18:31
Ive been living there for four months now, the house is clean, air conditioned and have an alano club near by. Management is freindly and they really care. I've been to other sober living houses and this one is the best by far!